Watertight and water vapour permeable materials - Is that possible?

In the first blog of this series (“How to prevent Radon gas penetration in concrete structures”) we described how to use membranes to prevent Radon penetration into houses. In our second blog (“Methane and Biogas containment”) we looked at gas movement in the other direction, describing how membranes prevent biogas and methane escaping from concrete structures, and finally in the third blog (“Increasing insufficient concrete cover to reinforcement using coatings and membranes”) we reviewed the impact of carbon dioxide on concrete and how to use coatings and membranes to enhance concrete durability.

In this last post of the series about permeability of waterproofing membranes to gases, we will review water vapour and its effects on concrete.

What is water vapour?

Water vapour is the gaseous phase of water. Water is constantly cycling through the atmosphere: it evaporates from the earth's surface and rises into the atmosphere. It condenses into clouds, is blown by the wind, and then falls back to earth as rain or snow.

It may sound surprising, but water vapour is the most powerful of the greenhouse gases in the earth’s atmosphere, but its behaviour is fundamentally different from that of the other greenhouse gases as water vapour does not control the earth’s temperature. On the contrary, the temperature of the atmosphere limits the maximum amount of water vapor that can be contained in the air which is not the case with other non-condensable gases like CO2 or CH4. 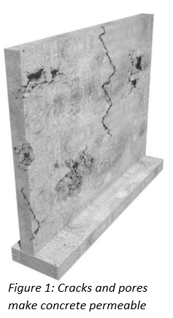 Every concrete element starts with a certain quantity of water as a result of the mixture with cement. Water which is not bonded into the cement crystals will evaporate from the concrete matrix during or after hardening.

Later, capillaries formed in the concrete matrix during the hardening stage due to water evaporation can act like a sponge, absorbing direct water sources (e.g. rainwater, poor plumbing, moisture from surrounding soil, etc). Once water has penetrated, migration to empty pores begins. Pores near a dry, exposed face then allow progressive water evaporation, until an equilibrium with the surrounding air is achieved.

Once the drying process of the concrete has finished and reached an equilibrium, water vapour can still penetrate the concrete when there is an increase in the relative humidity of the ambient air. In a high humidity environment, the concrete can start absorbing moisture instead of releasing it until a new equilibrium is reached.

After the application of one of these toppings, when moisture contained in the concrete migrates to the surface or tries to escape, several undesired phenomena can occur:

Problems like this can occur in applications such as walls in buildings that separate environments with different temperatures and relative humidities, slabs-on-grade with non-existing or damaged subsurface water vapour barriers (damp proof membranes), or recently applied repair mortars which still have a high degree of residual humidity. In such situations, concrete surface treatments must allow easy evaporation of water from inside the concrete in addition to a low uptake, if exposed to liquid water.

Where easy evaporation of water is required, it is vital to assess the permeability of waterproofing membranes and other surface treatments.

The vapour resistance of a material is a measure of its resistance to water vapour passing through. It is usually measured in MN•s/g or GPa•s•m²/kg and, as it includes the material’s thickness, is dependent on each type of application.

The µ-value of a material is also a measure of its relative reluctance to let water vapour pass through, measured in comparison to the properties of air. As it is a property of the material itself, to know the behaviour of the material in a particular construction, it needs to be multiplied by the applied thickness. The obtained “equivalent air thickness” (SD) is the thickness of a static layer of air that has the same resistance to penetration of water vapour as the considered building material of thickness “t”.

In Europe, coatings and membranes applied as surface protection systems for concrete must comply with EN 1504-2 which requires permeability to water vapour to be tested and establishes three different levels:

In contrast, EN 13813, which regulates the properties and requirements for screed materials, does not require testing of water vapour permeability for synthetic resin or asphalt or screeds while it is required for cementitious, calcium sulphate and magnesite screeds.

In the table below the capillary water absorption, the permeability to water vapour and recommended application thickness for three of our different technologies are summarized:

MasterSeal 6100 FX is an elastic crack-bridging cementitious waterproofing membrane that is used for waterproofing concrete and masonry structures.

MasterTop TC 428 is a water-based epoxy top coat with semi-glossy finish that is used on concrete floors and screeds in the MasterTop 1728 and 1728 R systems.

And, as a summary…

Excess moisture is the cause of many coating failures on concrete. The usual way to control water forces inside the concrete, if the source of water cannot be removed, is the use of breathable products that can be applied on humid substrates and allow moisture to evaporate though the material without developing forces that can affect its adhesion or its long-term performance.

All three products presented show a very low water absorption (they act as a “barrier” to liquid water) and at the same time a high breathability which makes them suitable for avoiding these moisture-related problems.

However, the development of new products and technologies means that, for some structures, the effect of water contained in concrete can be counteracted without the need for breathable systems. See some examples in the post “5 successful cases of negative-side waterproofing using MasterSeal P 770 and MasterSeal P 385 primers in in-ground tanks and cisterns.”