A car park structure built of concrete is constantly exposed to aggressive media that compromise its aesthetics and durability which will more critically also affect safety and in particular the safety of its customers. 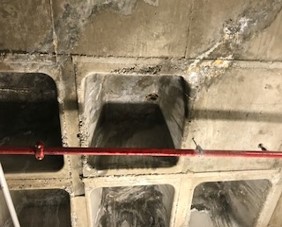 Exhaust fumes from the combustion of hydrocarbons used in vehicle engines contain large quantities of carbon dioxide (CO2) and water vapour. Both gases play a decisive role in the carbonation of the concrete which slowly contaminates the concrete and will eventually reach the reinforcing steel and facilitate its corrosion. 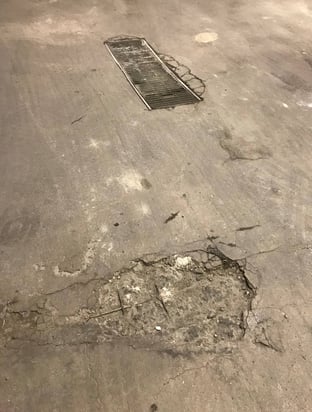 The second most common cause of concrete degradation is chloride-induced corrosion. Chlorides can lead to reinforcement corrosion once they penetrate into the concrete and reach the steel reinforcement.

In the case of car parks, the source of chlorides is typically road de-icing salt which is used in cold climates. It is transported in by cars via water or snow on their tires or car body and deposited when they park. 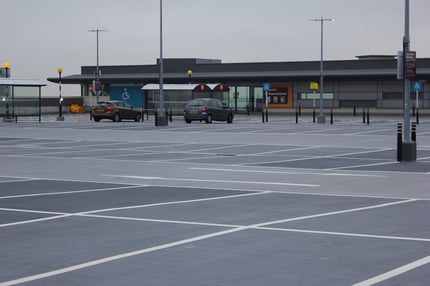 MasterSeal Traffic waterproofing systems are also resistant to mechanical damage from abrasion, abrupt braking, sudden changes of direction caused by vehicular traffic. In addition, they must be slip-resistant for pedestrians when leaving or returning to their cars and have a low dirt pickup capacity to keep them looking attractive and pleasant so that customers will keep coming back.

But what happens when corrosion has already begun, and the concrete is damaged?

Once the corrosion process has begun, it is not only those areas where the concrete is visibly affected that must be repaired. Before corrosion is visible on the surface of a concrete structure, a greater invisible corrosion process in the substrate is much further advanced. For periods of anywhere between a few months and several years, damage can spread throughout the structure and will even result in severe structural failure if it is not addressed in time.

Under these circumstances, the use of Surface Applied Corrosion Inhibitors (SACI) such as MasterProtect 8500 CI is a final option to stop corrosion and avoid the damage spreading throughout the entire structure that would require complete and costly reconstruction works with lengthy downtime periods of no parking and lost income.

MasterProtect 8500 CI has a very low surface tension, and low viscosity that improve penetration into concrete when spray, brush or roller applied. Recent tests have been able to measure the penetration of the product into a concrete matrix of up to 6 cm.

MasterProtect 8500 CI is a clear liquid that does not change or alter the surface appearance of the concrete substrate. It will not act as a bond breaker in repair or overlay applications eliminating the need to remove the product prior to the installation of other MasterProtect coatings or MasterSeal Traffic waterproofing systems, saving time and reducing jobsite complexity.

Independent testing of MasterProtect 8500 CI has shown it to be very effective at reducing the active corrosion process in steel-reinforced concrete. 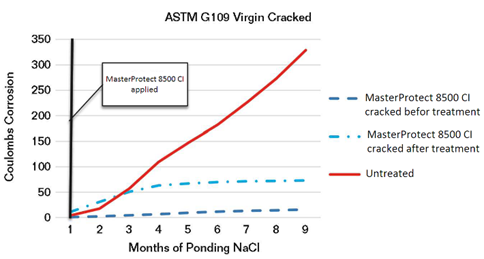 The graph shows specimens coated with MasterProtect 8500CI before and after cracking and an untreated control specimen. Crack widths were ~0.3 mm.

The specimen treated with MasterProtect 8500 CI before cracking shows only slight corrosion. On the other hand, corrosion started in the specimen, which was cracked after coating, but it then stopped and did not increase during the nine months of ponding. 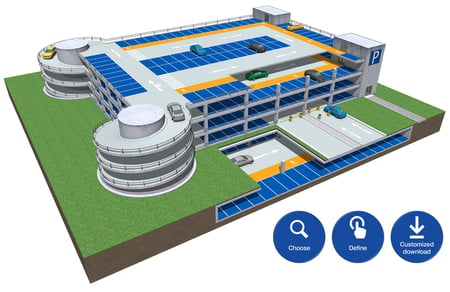 Refurbishment of car parks needs to include concrete repair, corrosion protection and the requirements of each of the different deck types (exposed top decks, intermediate decks, ground and below-ground floors or ramps and spindles) needs to be taken into account.

To find the best park deck solutions including all the necessary steps for each deck type and information about product systems, go to the “Car Parks” module in the Online Planning Tool by Master Builders Solutions to plan your potential projects.

After the solution has been defined, the tool can generate a customized specification report which includes all related product documentation, such as datasheets, certificates and BIM Objects.