Why does concrete crack? Part 1 - The main reasons

Concrete is the most common building material around the world. Since the invention of modern cement by Louis Vicat in 1817, research and development efforts have improved its properties: applications have been improved, mechanical strength and chemical 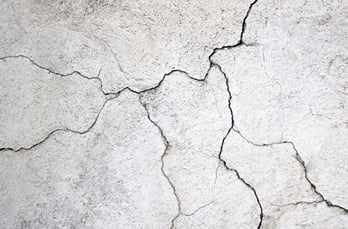 resistance have been increased and new materials such as pre-stressed concrete have been developed. Has concrete become perfect over the years? Looking carefully at the many concrete structures that surround us, even including the most recent buildings, we see that not one of these structures is perfectly intact. This highlights the unavoidable weakness of concrete: its tendency to crack. Cracking is exacerbated by the factor which made concrete so popular: its compatibility with steel, and the ability of reinforced concrete to meet the requirements for an advanced building material. However, are cracks all the same? Certainly not! In fact, cracks can be caused by several different factors such as deformation, hydraulic shrinkage, thermal shrinkage or swelling. The main differences are explained below.

The forces applied to the structure, tensile, compressive or shear forces to the concrete. These forces generate deformation, which can lead to cracking. The location and geometry of the crack on the structure is often characteristic; the cause can then be identified by observing the cracks.

A piece of concrete in the open air usually shrinks during hardening. This shrinkage is due to the evaporation of part of the water contained in the concrete. Cracking occurs when shrinkage forces become greater than the strength of the concrete. This can be seen as a race against time between two phenomena: the evaporation of water and the increase in the strength of concrete. This is also true for concrete parts that cannot deform. In the case of shrinkage, deformation cannot occur. These conditions create internal stress, which lead to cracking, when the stress exceeds the strength of the concrete. It should be said that any concrete structure which is immersed or located in an atmosphere saturated with moisture has very low dimensional variation. Cracking can take place before the concrete has set. This is not purely as a result of hydraulic shrinkage, but rather of a shrinkage due to evaporation of a part of the water or due to absorption of the support. This phenomenon mainly affects pavements cast in hot and dry weather, or concrete laid in cold weather in heated rooms or on a porous support. Cracks occur in specific areas such as concrete joints and in the vicinity of reinforcements.

This issue mainly concerns large structures. Cement hydration is an exothermic reaction, producing heat that dissipates over time. The variation of temperature, which is also not equal in all parts of the structure, generates differential deformation, which may lead to cracking.

There are several factors which may cause concrete to swell. The most relevant are the following. Concrete may swell because of salts such as sulfates, which can be contained in the earth in direct contact with the concrete. This leads to a chemical reaction with the aluminate in the cement itself forming an expansive substance. Swelling may also occur as a result of the freezing of the free water in the concrete, which increases in volume when it is turned into ice. Finally, swelling may be caused by oxidation of the internal reinforcement in the concrete, a phenomenon which is accelerated by the presence of cracks! All these phenomena, even if of different nature, lead to the same result: the creation of internal tensile forces, which will lead to the appearance of cracks if they exceed the strength of the concrete.

Cracks caused by corrosion of the steel reinforcement

Concrete is highly alkaline and therefore protects steel reinforcement, ensuring that reinforced concrete is an outstandingly durable material. Nevertheless, the rebars may corrode under certain conditions, forming rust. As the volume of corrosion products (rust) formed is greater than the volume of the initial rebar, this causes tensile stress on the concrete. In the case of advanced corrosion, the concrete may crack and delaminate. The main causes of corrosion of steel in concrete are:

In the second part of this article “Why concrete cracks?” we will focus on what is the impact of cracking and in the third part on what are the most important preventive measures.

Innovation in action: a new way to renew wastewater tanks