How to prevent Radon gas penetration in concrete structures

“Standard concrete as well as other construction materials (gypsum, limestone, brick…) do not hinder the migration of radon in a sufficient way”
- Professor Dr. Keller, radon expert, University of Saarland

Radon is a radioactive gas that forms naturally when uranium, thorium, or radium, break down in rocks, soil and groundwater. Therefore, as radon comes naturally from the earth, people are always exposed to it, mainly from breathing it in air that penetrates buildings through cracks and gaps.

According to the World Health Organisation (WHO), radon is the second most common cause of lung cancer in the general population, after smoking. WHO estimates that the proportion of lung cancers attributable to radon ranges from 3 to 14%, depending on the average radon concentration in the country concerned and the calculation methods used.

The main problem is that radon is a colourless, odourless, and tasteless gas that is not detectable by human senses alone and the general public is often unaware, not only about the risks associated with radon, but even about its existence and effects. 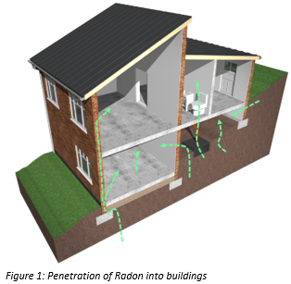 Although radon is present everywhere, the highest amount of radon exposure occurs at home or in buildings where people spend long periods of time, like schools or offices.

Radon typically moves up through the ground to the air above and into buildings through cracks, pores and other holes in the foundation and accumulates inside buildings.

As Professor Dr. Gert Keller, an expert in radon from the Institute of Biophysics at the University of Saarland, states, standard construction materials do not sufficiently hinder the migration of radon and especially concrete must be carefully consolidated “to avoid a strongly connected pore system and therefore a diffusion path”.

Masonry and concrete, however well compacted, contain pores and there is no way to avoid this.

Pores allow water, air, and other liquid or gaseous substances to enter the concrete matrix. They are the primary reason for concrete deterioration, either due to reinforcing steel corrosion (e.g. due to carbonation or chloride depassivation) or due to cement matrix degradation (e.g. sulphate or acid attack).

The permeability of concrete can also lead to unhealthy environments related to humidity or radon exposure.

Permeability depends mainly on the size of pores, connectivity of pores, and how tortuous the path is for the permeating fluid. Also, the presence of cracks, honeycombs and other concrete defects will obviously increase the permeability of concrete.

In the map below, the areas in Europe with higher Radon concentrations can be seen:

The WHO proposes, based on the latest scientific data, a maximum level of 100 Bq/m3 to minimize health hazards due to indoor radon exposure.

However, if this level cannot be reached under the prevailing country-specific conditions, the chosen maximum level should not exceed 300 Bq/m3 and national regulations must be observed.

This map can only be used as a guide, since the only way to really know the radon concentration in a building is to measure it. Radon measurements in homes are easy to perform, but the testing regime must consider the occupancy of the different rooms of the building and its architectural configuration.

Radon is a global risk that needs to be addressed. Sealing cracks and other openings in foundations is the first step in radon reduction. It is a measure that improves the effectiveness of other methods of radon control inside new buildings and remedial options for existing ones.

Some common ways of reducing radon levels in buildings include:

Generally, passive systems of mitigation can reduce indoor radon levels by more than 50%. With additional ventilation fans, radon levels can be reduced even further.

It is important, once remedial measures have been installed, that radon levels in the house are measured again.

There is no standard that defines when a material is “radon tight.” However, when evaluating the capacity of a material to act as radon barrier, it is usual to refer to the work of Professor Keller. His research has shown that a material is radon tight if its applied thickness is more than three times the diffusion penetration length obtained by testing.

The results of tests on two of our materials, which have recently been tested as radon barriers, are listed in the table below, showing penetration lengths and hence the required thickness of application.

MasterTop P 622 is an epoxy primer from Master Builders Solutions that is used in combination with several types of epoxy and polyurethane basecoats and membranes. It provides not only adhesion to the substrate, but also an effective protection barrier against Radon. 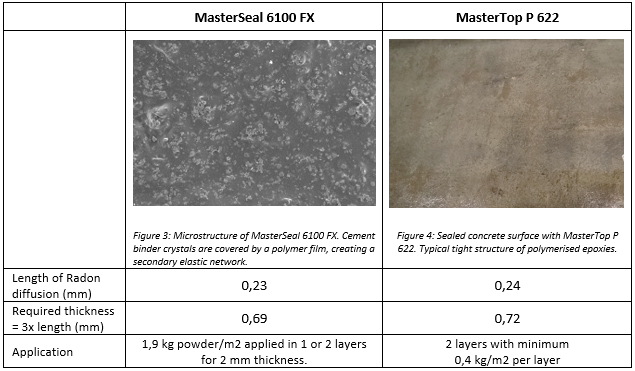 The drawings, below, show several ways to install barriers depending on the configurations of the building:

Find the following articles on our series the "Permeability of waterproofing membranes to gases" here: