Perhaps one the greatest achievements of the offshore wind industry has been its capacity for standardisation. Standardisation is gold dust in any industry and especially so in one where cost barriers are as high as in offshore construction. Indeed, once the initial shock of the 2014 oil crash had passed, the oil industry’s focus moved quickly towards implementing standardisation measures. Oil and gas had historically been a high margin affair and standardisation a low priority. 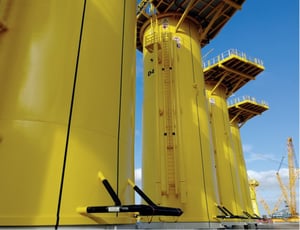 Offshore wind, on the other hand, has always been a different proposition. Tight margins connected to civil engineering culture and project economics driven ultimately by an industry in the hands of government financial support has meant that standardisation was not so much an option as a necessity.

One only need visit a fabrication facility like that of SIF in Rotterdam to witness the fruit of standard design. Steel arrives by barge and is unloaded and rolled into monopiles before being racked up in the yard alongside scores of identical products. Sarens mobile lifting frames collect finished transition pieces of more than 400Te and run them to the quay’s edge with the ease that a forklift might deliver a pallet. The industry’s scale in Europe allows for a standard, repeatable operation, and at first glance it appears to be perfected.

However, a more intimate knowledge of offshore wind turbine foundations tells a different tale.  During the last decade, following a joint industry project in 2009 which clarified a need for grouted foundation design changes, those standing to gain from the rise of bolted connections managed to misrepresent the report’s recommendations and shoehorn bolted connection design preference into the minds of design engineers across the industry.

Vertical cylinder-to-cylinder connections were correctly deemed to be unfit for purpose. The design change recommendations came in the form of the introduction of shear keys and conical connections, sometimes used exclusively but also as a combined solution. All recommendations from the DNV-led joint industry project were grouted connections. 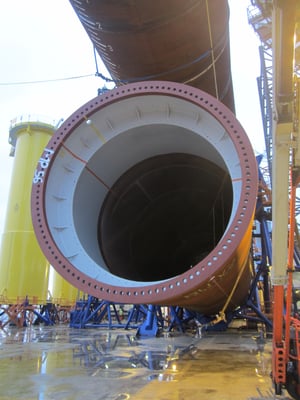 Fabrication costs of bolted connection monopiles and transition pieces are high. Large diameter connections require bespoke bolts and flanges at odds with our standardisation culture. As such, the argument in favour of bolted connections centres around a supposed faster installation time. But anyone with site experience will testify to the issues around bolt alignment when landing the load. Once the load has eventually been landed, the contractor then has the challenge of correctly torqueing the many bolts in the correct sequence before safely returning the team of bolt technicians back to the vessel. It looks simple on paper.

The next fly in the ointment comes when the seal around the transition piece is broken by crew transfer vessel landing impact. Sea water soon fills the transition piece skirt at which point the bolted connection’s integrity is compromised. Corrosion and the monitoring thereof starts to add zeros on to the operation and maintenance costs.

A costly experiment with bolts in monopile foundations

At BASF we are aware of these bolted connection issues because we designed the grout used to remedy the situation.
MasterFlow 9600 was designed and brought to market specifically to backfill the transition piece area offering robust impact protection and preventing corrosion to bolted connections. This is ironic since bolted connections rose to prominence as an alternative to using grout.

Intent upon quantifying the scale of their new operations and maintenance budgets requirements, offshore wind investors are currently studying the true performance of bolted connection wind farms. In addition to corrosion issues, the industry is aware of bolt cracking and premature torque loss, but the exact details on this front are, understandably, being kept quiet. One should not rule out a joint industry project to answer the questions around bolted connections.

Meanwhile, a benefit of bolted connections as a false competitor in the offshore wind turbine foundation space has been an innovation drive in MasterFlow grout technology. Incremental innovations in bulk supply products, and cost optimisations where grouting appears off the critical path means the industry is swinging back to grouted connections. Investors and designers are recognising the false economy of bolted connections and opting for grout’s long term durability and low life-of-field OpEx.

A return to grouting innovation

MasterFlow innovation in terms of rapid strength gain is also paying dividends in weather window exploitation for the contractor as well as reducing early age cycling risks. With specific grouts for specific foundations, there are no requirement to take the risks associated with bolted connections. In-field project execution benefits of a MasterFlow grout for the contractor, and life of installation peace of mind for the investor means MasterFlow grouts pay for themselves in both the short and the long term.

The introduction of bolted connections may have interrupted the industry’s efforts towards standardisation in offshore wind turbine foundation design, but, as the data becomes available around bolted connection performance, grout is having its renaissance. To get more information on grouting, do not hesitate to contact Richard directly: