Mastering Waterproofing. What do the experts say?

Our MASTERING WATERPROOFING campaign, launched on March 1st, celebrates our waterproofing expertise which stretches back over 100 years. We have been creating waterproofing products since Master Builders Inc was founded in Cleveland in 1909, and Standard Dry Wall Products (which later became Thoro System Products) began trading in Pennsylvania in 1912.

MASTERING WATERPROOFING also celebrates the key role that workmanship and quality play in the performance of waterproofing systems. Combining outstanding technology with excellence in application was the philosophy adopted by Stratis Goneos when he established Stratis Goneos S.A. in 1979 in Holargos, a suburb of Athens, Greece. Today his daughter, the current CEO and president of the company, Tatiana Goneou, pictured here with her father, continues that ethos. 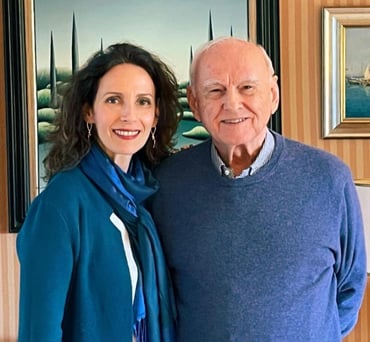 As one of the pioneers of waterproofing with pre-formulated products in Europe, Stratis Goneos explains the history of his company:

“In 1980 when the HQ of Thoro was in Miami, I was given the responsibility of expanding Thoro’s network and finding distributors in the Middle East, in countries like Jordan (Amman) and Cyprus.”

“One of our notable projects at that time was waterproofing the swimming pools in the King’s Palace in Amman with Thoro products. At the same time, I built a national network of over 40 distributors, all over Greece.”

Over the lifetime of the company, there have been many different types of projects, says Goneos:

“Throughout our 40 years of operation, we have waterproofed all kinds of structures from simple ones like swimming pools and houses to very demanding ones such as metro stations, including the Athens Metro.”

“Also, in cooperation with Greek construction companies, we waterproofed houses and below-ground structures for a newly built village in Kemerovo in Siberia for the local miners, where more than 540 metric tons of waterproofing materials were used.”

“We specialize in waterproofing below-ground structures where there is negative water pressure, and the job is very demanding. When there is no option to waterproof from the exterior, we provide the solution by waterproofing the interior surfaces very efficiently!” 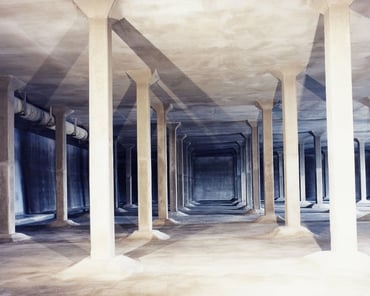 One of Goneos’ stand-out projects was the Central Water Reservoir in the co-capital of Greece, Thessaloniki, where the company carried out concrete repair and waterproofing in 2010:

“It was a very demanding job, as the reservoir was for potable water and the technical specification and timeframe were very strict. The quality of the concrete was poor, so repairs had to be done and then the whole surface waterproofed.”

During his extensive experience in the construction sector, Goneos has quite frequently come across structures that have already had more than 50 years of service life, such as those built in the 1960s and 1970s. “These structures usually suffer from problems of corrosion and severe damage to the concrete,” says Goneos. “It is absolutely necessary to repair the concrete damage along with the corrosion effects. For structures below the surface, we must repair the damage to the concrete and waterproof the surface.”

Goneos points out the growing importance of the refurbishment sector: “We have seen a great increase in the past decade. With the economic crisis, the construction of new structures almost came to a halt in Greece and renovations and restorations increased.”

Construction is a relatively conservative sector, but over his long career, Stratis Goneos has seen the evolution of many different products and now is witnessing the revolution of information technology. This, combined with the approach of new generations, is having a great influence on the construction world, he says: “We are living in a digital era. The use of websites, apps, blogs, BIM and LinkedIn are now normal means of communication in the construction world. In the repair business, remote monitoring of structures is growing. We have to accept that this will become more and more important in the future.”

The history of this family-owned company continues now with the second generation of leadership. Tatiana Goneou who, since 2000 has been the president and CEO of the company, continues the philosophy of offering innovative and efficient solutions to the construction industry, delivered by the company founded by her father.

Thank you to STRATIS GONEOS S.A. for the many years of collaboration and for helping us with this interview.