A little goes a long way: Why diligent maintenance makes a difference

While small repairs usually don’t cost all that much, larger-scale repair work is a totally different matter – a truism, yes. But with construction projects in particular, thinking ahead can make a major difference: Attending to maintenance in time and on a regular basis helps prevent major problems from developing later on – at which stage they will also incur disproportionally higher costs. Thus, having a long-term maintenance strategy in place will definitely reap its rewards..

Aging processes are a fact of life – people age, as do all man-made structures. Their physically inevitable disintegration process is accelerated by various types of impact on the structure, and simple usage is one of them. But this process can be slowed down: Making the right decisions during construction can significantly extend the service life of the structure, and after completion, maintenance plays a crucial role. A properly designed and implemented maintenance strategy – including regular inspection and the timely execution of necessary repairs – will go a long way to preventing sudden problems and cost explosions at a later stage.

In this regard, Wolter Reinold de Sitter, of Eindhoven University of Technology in the Netherlands, proposed a much-noted theory, known as the “Law of fives”. Put simply, the theory states that, in the maintenance and repair of concrete structures, a single Euro – invested in time and at the right place – can save up to 125 Euro across four stages. Planning ahead and keeping a close eye on the project is essential to avoid having to deal with unforeseen emergencies.

In his calculation, de Sitter defines the following four stages for concrete structures: 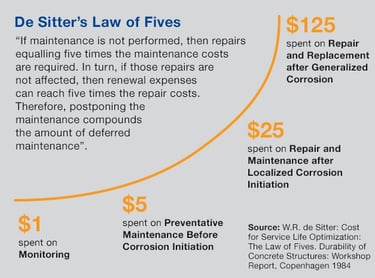 Across the first three of these four stages, de Sitter’s theory says, each sensibly invested Euro will account for five times its value in savings in the future: If maintenance during stage two is neglected, for example, addressing the resulting repairs in stage three will cost five times as much; if, during stage three, these repairs are again overlooked or postponed, the costs for then-necessary refurbishment will again increase five-fold.

The problem of cost pressure from the outset

However, those responsible for the maintenance of buildings and infrastructure facilities often find themselves in an all-to-familiar predicament: More often than not, cost pressure is extremely high from the outset; accordingly, the most cost-efficient products are selected despite the fact that those responsible know that higher-grade solutions would save significant amounts of money in the long term. Similarly, also for cost reasons, necessary maintenance and repair work is postponed again and again – resulting in a disproportionate increase in future expenses.

The rewards of keeping a long-term perspective

This, again, is why planning ahead and keeping an eye on the condition of concrete structures – by regularly inspecting them visually, for instance – is worth real money: A small investment at an early stage can, in the long term, save that amount many times over. Adopting a systematic approach helps keep track of everything and, in view of the care and thoroughness required, saves time as well. Checklists provide valuable support here: Serving as memory aid and highlighting details that may not seem particularly relevant at first glance, such lists also make it much easier to detect developments – both in general and in specific areas – across a succession of inspections.