In the third part of our series about the permeability of waterproofing membranes to gases, we will review another important gas that is highly dangerous for concrete itself: Carbon dioxide.

In the first part of our series (“How to prevent Radon gas penetration in concrete structures”), we described how to use membranes to prevent Radon penetration into houses. Considering gas permeability in the other direction, (“Methane and Biogas containment”), we described how membranes prevent biogas and methane from escaping from concrete structures in the second part.

What is Carbon dioxide?

Carbon dioxide is a colourless gas which is generated by both natural and human sources. Natural sources include decomposition, ocean release and respiration. Human sources are activities like cement production, deforestation and the burning of fossil fuels like coal, oil and natural gas. 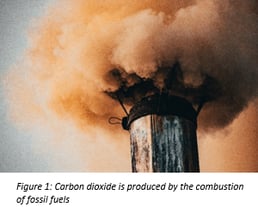 According to GlobalChange.gov, since the Industrial Revolution, the concentration in the atmosphere of emissions generated by humans has increased more than 20% in less than 40 years, leading to global warming due to the greenhouse effect.

The main difference between Carbon dioxide and the gases analysed in previous posts is that while Methane and Radon are inert towards concrete, carbon dioxide is one of the major causes of concrete degradation. The increase of this gas in the atmosphere represents an additional threat to the durability of concrete. 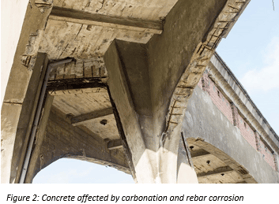 Carbonation is the reaction of Carbon dioxide with the calcium hydroxide in the cement paste. This reaction produces calcium carbonate and lowers the pH to about 9.

This is significant because steel reinforcement passivates itself in the highly alkaline environment of cement paste (about 13) and is thus naturally protected against corrosion.

At a pH of around 11 or lower, the protective oxide layer surrounding the reinforcing steel breaks down and corrosion can take place.

Concrete protection with coatings and membranes

Coatings and waterproofing membranes that are applied to concrete for aesthetic reasons or for waterproofing purposes, can deliver important additional benefits, preventing degradation and reducing the maintenance needs of the concrete.

Concrete carbonation does not occur where there are properly functioning coatings. Coatings and membranes must maintain their integrity when exposed to weathering, moisture, heat, ultraviolet radiation or chemicals in contaminated environments.

Other characteristics of the coating influence the durability of protective membranes, and hence the longevity of the protection. These include elasticity and crack bridging properties that prevent damage to the film due to substrate movements, as well as application thickness. We will review these characteristics in future posts.

Analysis of the permeability of membranes to Carbon dioxide is necessary to determine their capacity to protect concrete and ultimately to predict the durability of concrete structures.

The µ-value of a material is a measure of its relative reluctance to let Carbon dioxide pass through and is measured in comparison to the properties of air. The lower the µ-value, the more permeable the material. It is a property of the material itself and independent of the application thickness of the material.

The equivalent air layer thickness Sd combines the properties of the material with the application thickness, indicating the thickness of a static layer of air that has the same resistance to penetration of carbon dioxide as the building material of thickness “t”.

To be considered as an effective barrier against carbonation, coatings and membranes must comply with the requirements of EN 1504-2 and have an equivalent air thickness of Sd ≥ 50 m.

The results of tests on two of our materials, tested as anti-carbonation barriers, are listed in the table below, showing also the required thickness of application.

Measured according toPaints and varnishes. Coating materials and coating systems for exterior masonry and concrete. Determination of carbon dioxide permeability

The application of anti-carbonation coatings can compensate lack of concrete cover on rebars that could lead to premature degradation of structures.

According to Eurocode 2, minimum concrete cover should be provided to ensure safe transmission of bond forces, adequate fire resistance and protection of steel against corrosion. Depending on the structural and exposure classes, the minimum concrete cover can vary from 10 to 65 mm (See table 4.4N and 4.5N from EN 1992 Design of Concrete Structures - Part 1.1).

But sometimes, due to incorrectly installed formwork, inadequate spacers or incorrect placement of steel reinforcement, there can be inadequate cover for the structure. In these cases, remedial measures must be taken before corrosion begins.

To calculate the effect of a protective membrane, a comparison of the membrane’s permeability to Carbon dioxide with concrete’s permeability to Carbon dioxide is necessary. The lack of homogeneity of the concrete does not allow an easy calculation of the equivalent concrete cover offered by a coating or a membrane but, although other tests indicate lower values, based on the work of B. Francke et al., 20 mm of good quality concrete corresponds to an Sd of approx. 11 m.

Comparing these values with the Sd obtained by applying protective membranes and coatings demonstrates that these products can offer an additional “equivalent concrete cover” in cases where concreting defects or rebar unexpectedly found in the wrong position have reduced the necessary concrete cover to the rebars.